Platform for development and programming

Android robot with a height of 1.8 m.
Movable upper body: hands (optional), head, eyes, jaw.
The robot can be programmed for any functionality either by us, for an additional fee, or by the customer himself. We can add any software or hardware functionality. For example, the hands of the basic version are not mechanized, but they can be. This video shows the HR and Security version of the robot. This model is already offered with full functionality. You can read about HR robot here.

2. The simple version for programming and development.

The following versions are being developed.

3. Truebot Chatbot. This version can freely communicate on any topic and act as an exhibition worker, a watchman or a gatekeeper, a bartender and so on. All areas where you need an android robot for free conversation.

4. Robot-journalist.Corrbot. This version can take an interview as a journalist.

5. Robot-co-host for television. This version has different eyes that can reflect emotions. In the basic version, the eyes are cameras. The robot-co-host's eyes are monitors with animation.

We can develop any other functionality, any software, any appearance on demand.

The robot can be localized to any terrestrial language of communication.

Pre-orders are currently being accepted. The cost of the minimum configuration is 12500$. 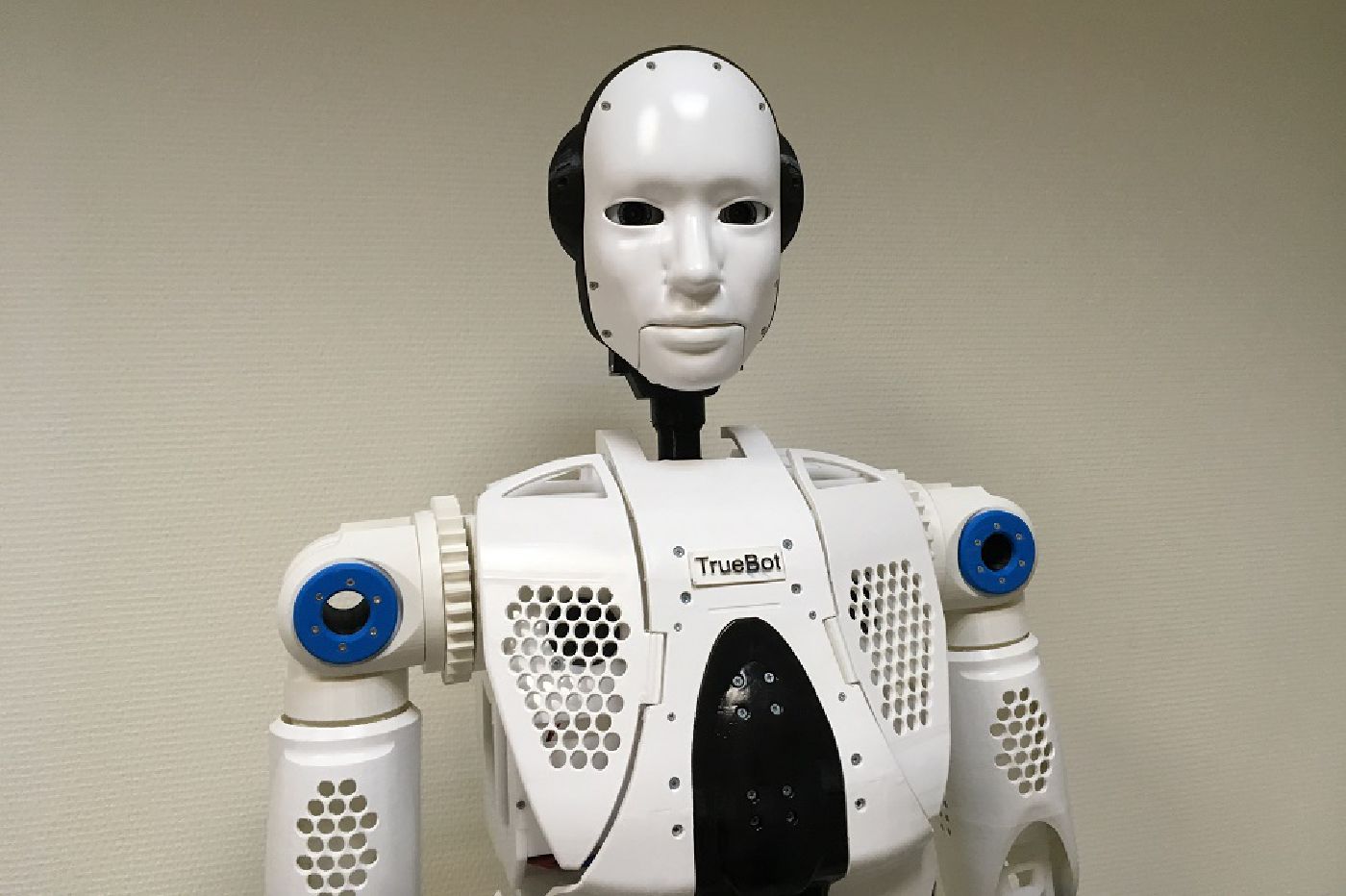 - Robot-journalist, TV presenter.
- Robot-promoter for an exhibition, porter, barman.
- Airport Security Officer.
- As an internal HR worker and as a recruiting agent.
- Check by the security service before hiring.
- Security service of an airports, shopping centers and so on: if the airport security saw a suspicious person, he can be taken to a room for conversation with the robot. After 40 minutes of the interview, the robot will determine if the person has an evil intent.
- For an interview in a bank when issuing a loan.
- Checking all personnel after a certain incident.
- Testing of business partners, suppliers and so on.
- and all related areas and similar examples.

Development of robotics, mechatronics and prototyping.

25.000 $
The version of the robot with a voice test: the robot follows a glance, moves its head, leads a voice test.
You can rent the robot for 2000$/day. During this time, he will be able to lead about 10 interviews.

30.000 $
This version, in addition to the voice test, is also equipped with a screen with a visual test and moving hands. Any other motorization can be added for an additional fee.
Order

16.000 $
The price includes PC with software or the software installation on any device, demonstration and training. 11000$ per set when ordering from 10 sets.
Order

12.500 $
The robot body with a motorized head, eye-camera and minimum settings, without softvare, for upgrading for any purposes. For an additional fee, any functionality can be added.
Order

or ask a question
Message is sent!

Subscribe to our Newsletter
Thanks for filling out form!